Wedding vs. Engagement Ring: Everything You Need to Know 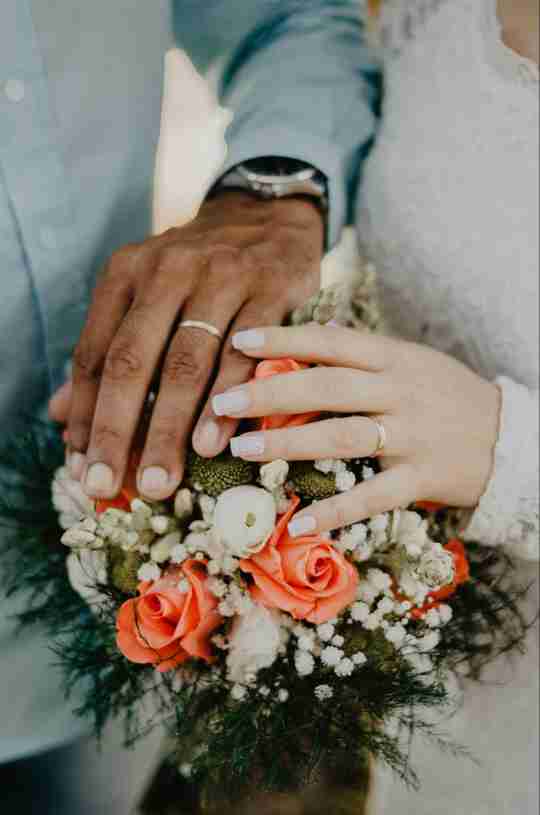 What’s the difference between wedding and engagement rings?

Everyone seems to know the difference, but what are the real distinguishing factors? Is there more to a wedding or engagement ring than meets the eye?

We’ll explain in more depth the exact differences between these two types of rings.

You’ll learn how to recognize each one by sight, the characteristics that make each one unique, and the average prices.

The differences between wedding rings and engagement rings

To start with, let’s look at the different styles of wedding and engagement rings.

I’ve included some pictures so you can get a better feel for the differences.

How does an engagement ring look?

The most popular design for an engagement ring is a band of precious metal with a single center diamond. The most common materials are platinum, rose gold, white gold, and yellow gold.

This gemstone design is typically called a “solitaire” diamond in the industry since it’s the primary gemstone on the piece.

As you can imagine, the diamond is typically the most expensive part of the ring. The larger the diamond, the more valuable the ring.

Sometimes, engagement rings can have decorations along the sides of the ring, such as other gemstones or designs.

How does a wedding ring look?

Unlike an engagement ring’s solitaire diamond, most wedding rings consist of a solid band.

(For this reason, you’ll often hear them referred to as “wedding bands.”)

Sometimes, particularly for women’s rings, this band is encrusted with gemstones.

Typically, gemstones will only be on the top part of the ring. A band with gemstones along the entire surface is called an eternity ring.

Most commonly, wedding bands are made of precious metals like gold, silver, or platinum.

However, some people—most typically men—choose a more stylized ring made of other metals, including copper, iron, or pewter.

Jewelers often sell wedding ring sets that include both a wedding and an engagement ring. Since they’re usually worn together, the wedding band is fitted around the engagement ring’s gemstone design.

Men’s wedding bands are almost always purchased separately and may or may not match a woman’s rings. 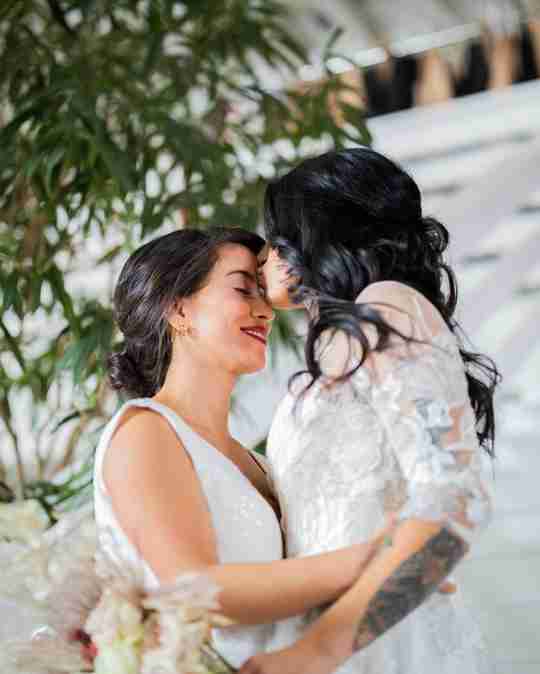 As humans, we’ve looked to jewelry for meaning and symbolism for millennia.

Yet surprisingly, wedding and engagement rings are a relatively new occurrence—it’s possible that your great-grandparents didn’t even use them!

Wedding rings have the oldest history by far, though they weren’t considered a universal symbol until recently.

The ancient Romans believed that a blood vessel ran directly from the third finger of the left hand to the heart. They called it the vena amoris, or vein of love.

In the centuries that followed, rings remained one of many symbols of love and commitment, along with other items such as lockets.

It wasn’t until the 1940s, during World War II, that wedding rings became a well-recognized symbol.

For one of the first times in history, millions of men found themselves fighting for their lives half a world away from their loved ones. To remember them, loved ones wore rings, which became a symbol to remember their commitment.

The story of the engagement ring is much more modern.

The solitaire diamond setting we consider “standard” was first invented by Tiffany & Co. in 1886.

To this day, that style of ring is sometimes known as the “Tiffany setting” in jewelry circles.

How to wear engagement and wedding rings

While it’s usually pretty easy to tell apart wedding and engagement rings (if you know what you’re looking for), there is no “standard” way to wear them.

That said, here are the most common traditions for giving and wearing engagement and wedding rings. 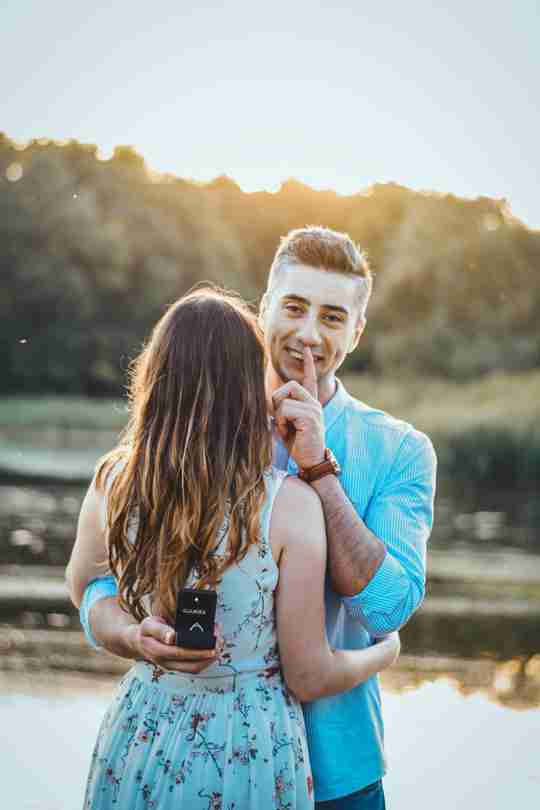 In a heterosexual couple, it’s typically the man who makes the proposal—but it’s becoming a new trend for women to take that step, too!

Whether or not a woman should present a ring is up to her, but she should know that engagement rings for men aren’t standard.

That said, the sky's the limit for your creativity, so if you’re in this situation, feel free to do what you think is best.

In same-sex couples, there is less of a traditional way of doing things, which only means more room for creativity.

Both partners may choose to wear a ring, only one partner, or neither. It all depends on your preferences and styles. 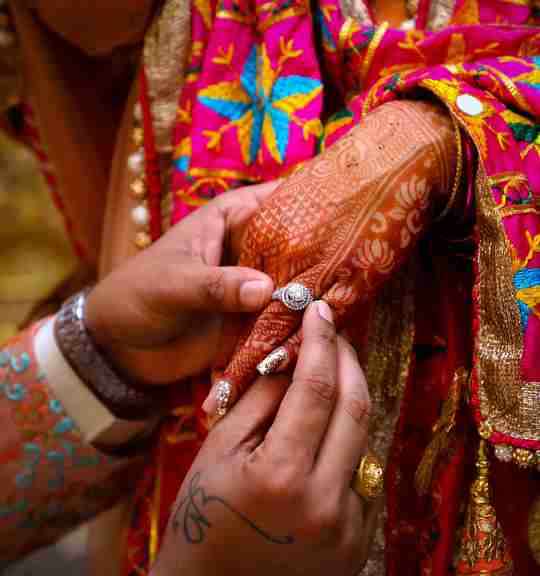 Both partners typically begin the wedding ceremony without any rings on their fingers—including no engagement rings.

During the ring presentation, the wedding bands are presented. After the ceremony, a partner who chooses to wear an engagement ring will usually put it on after the wedding ring.

This puts the focus on the wedding bands during the ceremony and keeps the wedding ring closest to the heart.

In addition to these traditional and symbolic reasons, it’s also helpful—since the engagement ring is typically larger, the wearer can easily take it off for day-to-day tasks.

What’s the price of wedding vs. engagement rings? 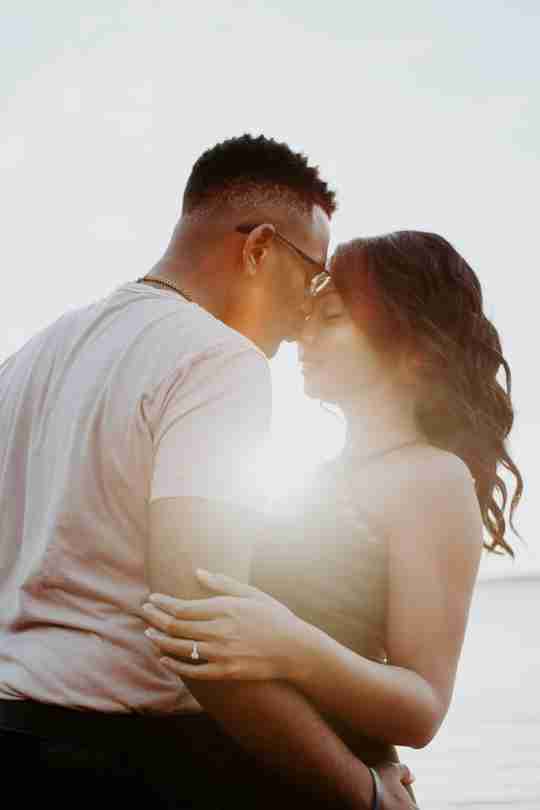 Like the price of any jewelry, the cost of wedding and engagement rings has a huge range.

What does an engagement ring cost?

For a simple engagement ring made of the most affordable precious metals (most typically 10 karat gold) with a small ¼-carat solitaire diamond, expect to spend a minimum of $500.

Extra details, such as complementary gemstones or a custom design, can bring the price up.

The most significant factor in price, however, is the quality and size of the diamond. A very large or unique stone can easily drive the price up to $100,000 or more.

What does a wedding ring cost?

The starting price for a wedding ring is considerably lower since few have the large diamond that makes up so much of the cost of an engagement ring.

A women’s wedding ring made of precious metals typically starts around $75, and you can expect to pay around $150 for a men’s wedding band made of solid gold or platinum.

In total, a couple looking to buy an engagement ring and his and hers wedding bands should set aside at least $750.

But that is the bare minimum, and the average cost is more than ten times that amount. A recent report shows that the average price is $7,750—just for the engagement ring.

Who buys the rings? 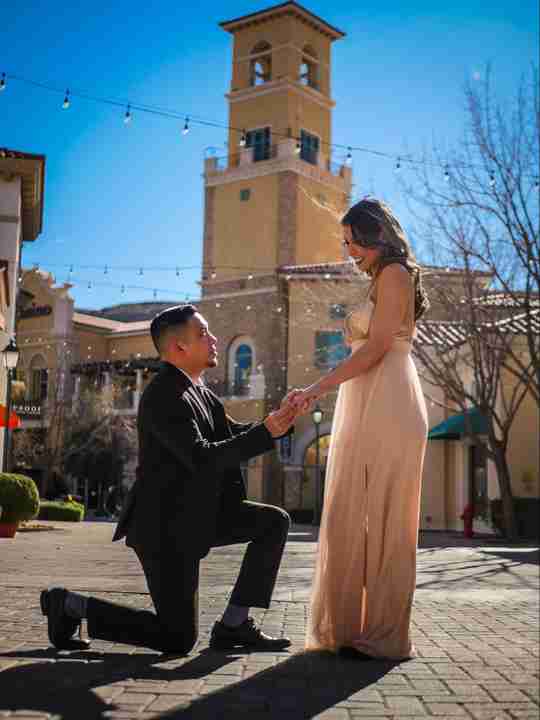 Traditionally, buying the woman’s wedding and engagement ring is the responsibility of the man.

In older times, a man’s ability to buy a high-quality ring showed he was financially stable and, therefore, a suitable marriage partner.

The typical rule of thumb for a man was to spend three month’s salary on an engagement ring.

In turn, the woman (or her family) would be responsible for buying the groom’s wedding ring. But as gender roles around the world have changed, this expectation has changed, too.

Today, it would be most common for each partner to buy the ring for the other partner, but that’s not a firm rule.

In the last few decades, there’s been a shift away from the materialistic focus on jewelry.

Today, many couples are placing more value on experiences than the piece of jewelry itself, which has led to several changes in the jewelry industry.

For example, many couples choose to select rings together, making it a bonding experience before marriage.

Another shift is couples looking to save on the price of a ring purchase and instead use the money toward an experience together, such as a one-of-a-kind honeymoon.

As culture changes, expectations and budgets for rings have shifted as well.

Which should you wear?

Wedding and engagement rings are beautiful symbols that represent the bond you and your partner share.

Because of that, there is no “one way” that perfectly describes what rings you should wear or why.

Instead, you should choose based on what inspires you and is meaningful to you and the person you love.

To help, we’ve included a few stories of how others have chosen to wear their rings.

Ed Sheeran: Engagement rings for both

Did you know that international pop star Ed Sheeran wore an engagement ring?

Before marrying his wife, Cherry Seaborn, Sheeran and Seaborn both wore engagement rings to show their commitment.

When an interviewer asked him why, his response was as simple as it was beautiful—I “feel like it’s good to both do things.”

Ivette Cruz: Our love is worth more than a ring 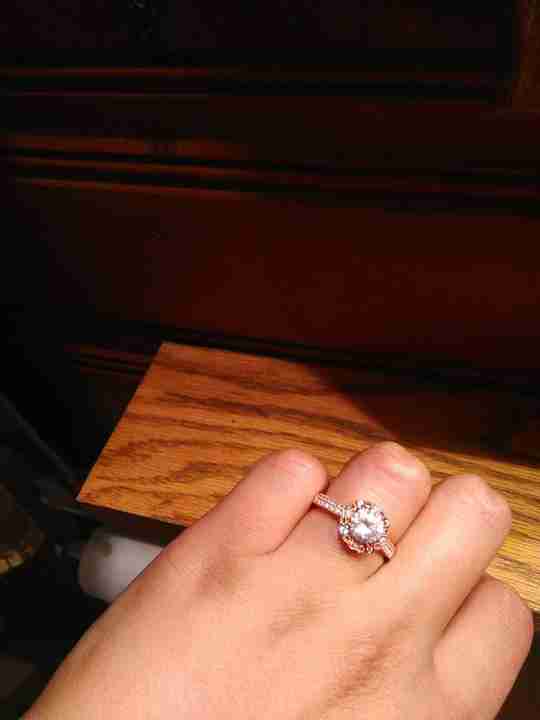 When USA Today profiled different couples and the rings they chose, Ivette wasn’t afraid to share what she loved most about her ring.

“My fiance and I have been together for six years with a baby on the way,” she said.

She explained that “a diamond worth thousands isn’t worth more than the love we have for each other. My engagement/wedding ring cost less than a hundred bucks and I love it!”

Kristi: Buy yourself a ring to celebrate the occasion 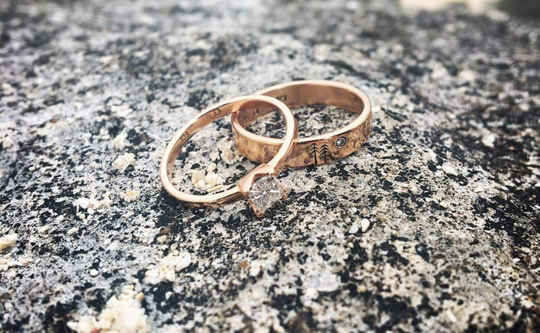 While there may be clear-cut traditions on rings for a bride and groom, Kristi found that she had more freedom when proposing to her girlfriend.

“I thought as me being the proposing I would get 2 rings,” she says. She wanted to celebrate the occasion, too.

“I didn’t want to miss out on a putting a ring on to celebrate our occasion, so I orded myself a ring too!”

If you’re looking up wedding and engagement rings, you’re at an exciting time—congratulations!

The first and most important thing to know about the two types of rings is that it’s all up to you and your partner.

What really matters is the bond you share and what kind of piece you believe best represents that.

Traditionally, an engagement ring has a larger solitaire stone in the center, while a wedding ring (also called a wedding band) is plain without any gemstones.

But what matters most is what you and your partner believe is meaningful.